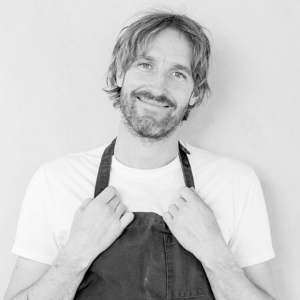 Michelin star UK chef Mark Raffan introduced Darren Robertson to food. When he was 24 he moved to Australia to work for Tetsuya Wakuda. He stayed at Tetsuya’s for eight years during which time he was Head Chef for three years. In 2010 he started The Table Sessions, a ‘guerilla dining’organization that ran pop-up dinners. These dinners won the accolade of Best Event 2011 by Australian Gourmet Pages.

Darren is one of the founding members of the Taste of Young Sydney (TOYS), which celebrated collaboration and experimentation in the kitchen and was awarded the Innovation Award in the SMH Good Food Guide 2010. Darren then went into business with a group of friends at the Three Blue Ducks in Bronte. The Three Blue Ducks has held a SMH chefs hat from 2011-2014 and has also opened Three Blue Ducks in Byron Bay, Rosebery, Brisbane and Melbourne. Darren also has The Rocker in Bondi.

Daz is also the co-author of three cookbooks and writes for Delicious. He has appeared on MasterChef, Iron Chef USA, The Great Australian Cookbook and MKR. He is an ambassador for the Australian Cancer Council, Oz Harvest and sits on the judging panel for the Delicious Produce Awards.

When he’s not foraging or surfing, he’s in the kitchen cooking, fermenting, pickling, and testing recipes with his fiancée – meteorologist, journalist, TV presenter and food author, Magdalena Roze, and sons, Archie and Charlie.

Darren has started producing his own You Tube series The Pretty Good Feed using local produce and locations around his home in Byron Bay.