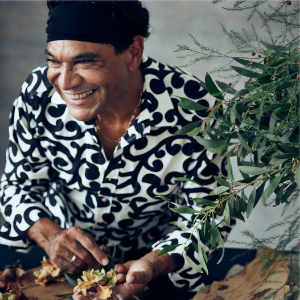 Mark Olive, aka ‘The Black Olive’, has been a chef for over 25 years and has become a well known Australian celebrity with his charismatic style and creative approach to food, starring in his own television series, ‘The Outback Cafe and a host of cooking, lifestyle and travel shows nationally and globally. Mark’s passion for fusing native food and culture with contemporary lifestyle cooking has led to a huge international profile specializing in Australian Indigenous cuisine. Recently he’s been a celebrity    judge alongside Dan Hong and Melissa Leong on the successful series on SBS The Chefs’ Line which brings home cooks and seasoned chefs together making some delicious dishes and more recently, as Celebrity Chef and co-host on the series, “On Country Kitchen” on SBS.

Mark is an Iconic ambassador for “Indigenous Food, Culture and Hospitality:· As a Bundjalung man. Mark’s family originated from the Northern Rivers region in NSW. Born in Wollongong he became interested in cooking as a child, watching his mother and aunts prepare meals. He trained under a European chef and has worked in several kitchens ranging from theatres, film sets, a la carte establishments around the globe and his own restaurants and catering company.

Mark cooks, demo’s and workshops regularly for clients such as Tourism Australia (TA), large corporate, public and cultural events around the  country and the world bringing his signature infusions of contemporary outback flavors lo every occasion.  Due to his success, Mark has been selected to be a member of Tourism Australia’s ‘Friends of Australia’ program which was “created to harness the power of bright and Influential individuals who are making a name for themselves on the world stage and who have a genuine affinity with Australia”.